We wrapped up our last Bass League tournament on Wednesday, May 18 at Sharon Woods Lake. Fishing conditions were rough on our anglers due to a cold front moving in and blue skies without cloud coverage. These were tough conditions, and a lot was on the line. The top team in points would be prized with a $300 gift card to Bass Pro Shops, two annual Great Parks’ rowboat passes and a free entry into the Bass Series Championship.

The 2016 Bass League was another competitive year. After the fourth tournament, there were three teams within three point of each other. The leaders, Elvis Miller and Larry Fillers, needed a victory on the last league tournament, and that’s exactly what they got! When no one else could figure out the pattern, they caught four fish that weighed 9.33 pounds! Their two largest bass were almost the exact size: one weighed 3.33 pounds and the other weighed 3.32 pounds. For catching the biggest bass of the night, they also were awarded a $25 gift card sponsored by Wholesale Bait.

The closest competitor to the “2 Old Fat Guys” (Elvis and Larry’s team name) only caught 3.53 pounds. On top of winning prizes that valued $565 and a free entry into the Bass Series Championship, they were also awarded a huge trophy. They gave the trophy to our youngest competitor, Shane Thomas. Shane was extremely excited and thankful for the generous act from the “2 Old Fat Guys.”

The 2016 Bass League at Sharon Woods was filled with talented and good-hearted anglers. Congratulations to all anglers on a great season and hats off to our 2016 league champions, Elvis Miller and Larry Fillers! 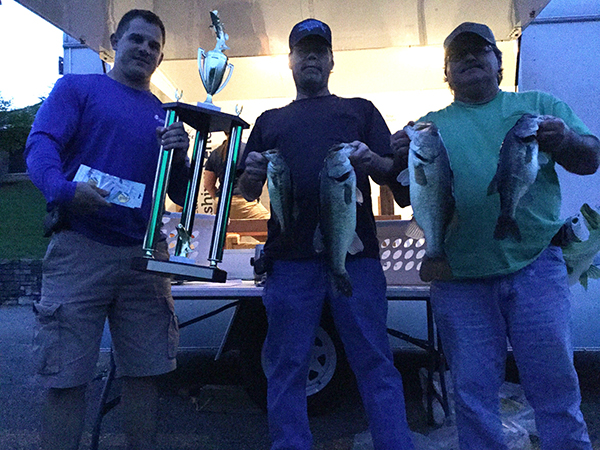 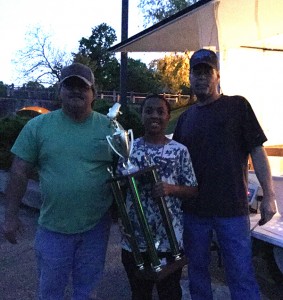