With spring just around the corner, the time is coming to catch a glimpse of the first spring wildflowers of the year. Two of the first early risers, and most noticeable due to their bright yellow petals, are winter aconite and lesser celandine. Both of these wildflowers are non-native (meaning they do not originally come from Ohio) and at least one (if not both) can be viewed as invasive, but both are visually striking and harbingers of spring none the less.

Winter aconite (Eranthis hyemalis) is often among the first wildflowers to be seen blooming in the spring, and as the common name suggests, will sometimes bloom midwinter if the temperatures have been mild enough. Aside from the yellow blooms being an identifying characteristic, the leaves just below the flower resemble a collar like out of the Elizabethan times or that of a court jester. This is fitting, as this flower seems to be mocking all the others as if to say “Look at me! I’m the first to arrive and all the rest of you are still asleep!” 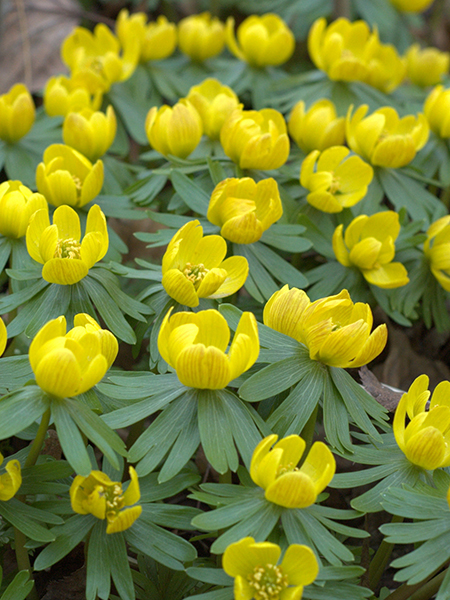 Another (not so humorous) wildflower for us here in Ohio is lesser celandine (Ranunculus ficaria). This little yellow flower has dark green, somewhat waxy, heart-shaped leaves. Both winter aconite and lesser celandine are members of the buttercup family, but unlike winter aconite, lesser celandine is a huge problem for land managers and can wreak havoc on native wildflower populations. To some, it may not appear to be a threat as it usually goes dormant by June, but I’m sure the native spring wildflowers that get outcompeted by the blankets of lesser celandine would say otherwise. 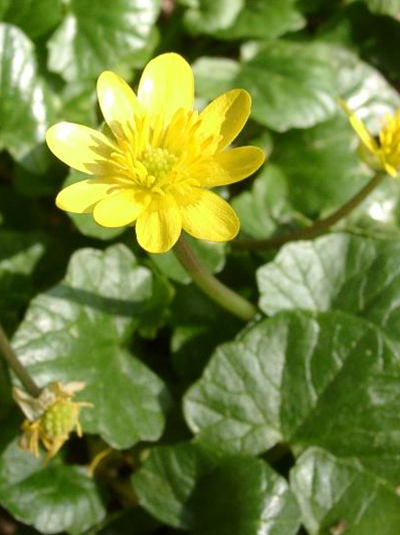 The last wildflower I will mention here is actually called harbinger of spring (Erigenia bulbosa). It is also referred to as salt and pepper, because the contrast of its dark anthers against the white petals looks like salt and pepper to some people. This little native plant can be measured in centimeters, has tiny white flowers and is in the carrot family. This is another early bloomer, but is often overlooked due to its size. 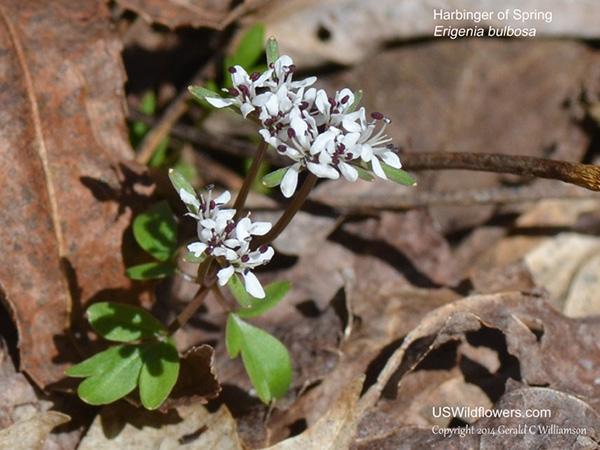 Seeing these early spring wildflowers are indicators of the beautiful plethora of other wildflowers that will be coming up soon. Many of our Great Parks are fortunate to have areas filled with native spring wildflowers like trilliums, trout lilies, cutleaf toothwort, Virginia bluebells, Dutchman’s breeches, spring beauties and many more. So be on the lookout for these and other harbingers of spring at your favorite park!