The Snowflake: An Intricate Masterpiece of Nature

What is a masterpiece? Simply put, it is a work of outstanding artistry, skill or workmanship. When viewed from afar, a single snowflake looks like a small frozen white ball. But let’s take a closer look. 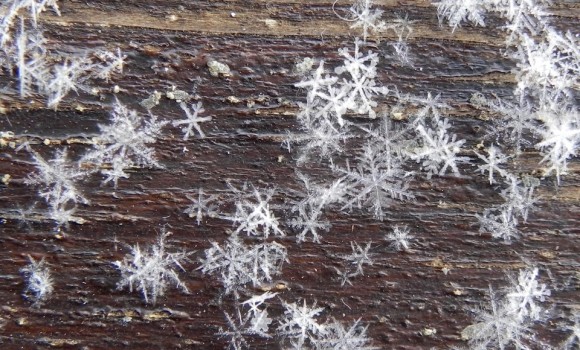 Formation of the snowflake begins aloft, way above the earth’s surface. It takes a very cold water droplet sticking to a particle of dust or pollen to begin the creation of a snowflake. As this tiny ball descends slowly to earth, water vapor freezes to the water and dust. Like magic, six arms are formed. The truth behind the magic is the crystallization. Crystallization is when water follows a pattern by filling in pre-determined spaces between molecules, thereby creating a six-sided snowflake every time. (This still sounds like magic to me!)

Temperature plays a large role in the shape of the snowflake. We have all seen varying sized snowflakes, from the very large to the super tiny. The colder the temperature, the more slender the snowflake’s sides will be. When the temperature is closer to 32 degrees, each flake will be more sizeable. Humidity plays a role, too. When the air is more humid, it may be easier to catch the big, wet flakes on your tongue. They even seem to have more “hang time” to aid you in this endeavor.

As the snowflake falls from the sky, it changes along the way. These changes are all to do with the variations in humidity and temperature the snowflake experiences on the way to the ground. Crazy that the snowflake’s arms all look the same, even as they change. This is because each arm is being affected by the same elements, causing uniform results.

With snow being a part of our region’s weather patterns, enjoy and explore nature’s intricate white tapestry. Venture outdoors and tip your head back. Look to the skies…and stick out your tongue. Strap on hiking boots and experience the muffled quiet of a snow covered path in the woods. For the adventurous, jet down a snow-covered hill on a sled.

And the question on everyone’s mind is this: Can two snowflakes ever be alike? Your answer lies in the magic behind the initial formation of each individual flake and in the changes imposed upon that same flake as it falls to the earth. Since each snowflake falls in a different path, they all experience different conditions. For these reasons, no two flakes are alike, but instead are a unique masterpiece of nature.