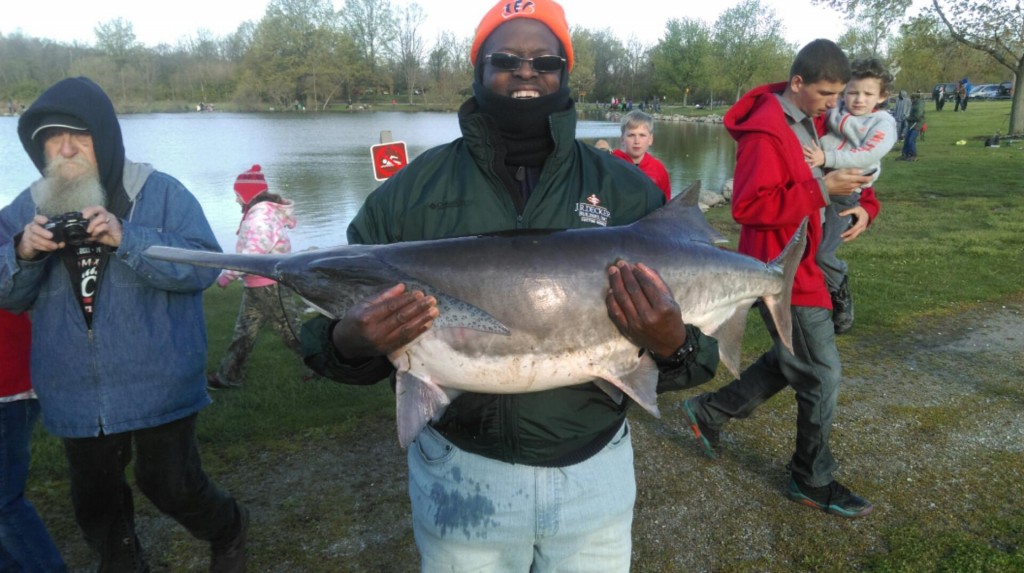 The paddlefish (Polyodon spathula) is a prehistoric fish that still lives in the Ohio River watershed today. In fact, the paddlefish is a 400 million year old species. The paddlefish is a filter feeder that eats zooplankton, which are small organisms in fresh waterways. A paddlefish can grow up to seven feet in length and weigh up to 160 pounds!

The paddlefish has many key ecological attributes that make it one of the most unique fish species in North America. The paddlefish is a fresh water fish that lives in large, deep, slow-moving rivers. Due to flooding, they can also be found in gravel pits along rivers. The fish can easily be recognized by the large snout and size as an adult. Their large snout has given them the nickname “spoonbills.”

The United States Geological Survey determined the paddlefish have been lost from four states and have become endangered in 11 of the 22 states that the fish at one time called home, including Ohio. The states include the Great Lakes drainage as well as the Mississippi drainage.

Unfortunately, there are many stressors for this species. One of the types of destruction that is affecting the paddlefish’s habitat is the construction of dams in the Mississippi basin. The dams disrupt the natural habits and spawning migrations for the fish. Many sources of stress for the paddlefish are related to humans in some fashion.

Since paddlefish are filter feeders, they usually don’t eat live or artificial baits. If you ever accidently snag the endangered paddlefish, snap a quick picture (so people believe you really caught it) and try to release it back into the water as soon as you can. By doing this, you can help the paddlefish species live another 400 million years!