Which of these do not belong? Lesser celandine (Ranunculus ficaria) or celandine poppy (Stylophorum diphyllum)?

The answer (which may or may not be obvious) is lesser celandine. The reason it does not belong is because it is not native to Hamilton County, southwestern Ohio, or even North America. Native to Eurasia, it was introduced in the United States as an ornamental plant and is still commercially available. Lesser celandine is considered an invasive species and poses an ecological threat to native biodiversity. It is aggressive and emerges earlier than most native species displacing the native ephemerals (such as celandine poppy) with its thick carpet of vegetation. You can recognize this plant by its basal rosette of dark green, kidney or heart-shaped glossy leaves and bright yellow flowers that rise on stalks above the leaves. This plant seems to prefer moist, sandy soils in forested floodplains, but will less frequently creep into dryer forested areas. 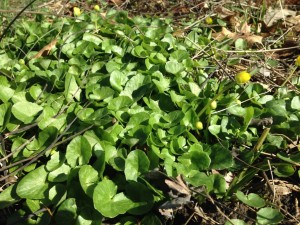 While lesser celandine is a member of the buttercup family, celandine poppy is a member of the poppy family. The common name is derived from greater celandine (Chelidonium majus), a closely related European plant with similarly shaped leaves and similarly colored and shaped flowers. Celandine poppy, also referred to as “wood poppy”, “poppywort” or “yellow poppy”, is one of the many native plants negatively affected by invasive species such as lesser celandine. Celandine poppy can be recognized by its pinnately cut and lobed leaves. The flowers are a deep yellow consisting of four petals, two sepals and many yellow-orange stamens. 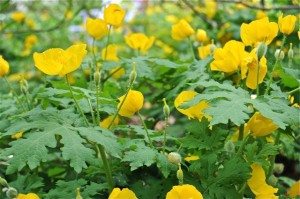 According to the Oxford English Dictionary, celandine comes from Ancient Greek meaning “swallow.” Ancient writers said that the flower bloomed when the swallows returned and faded when they left.

Great Parks of Hamilton County Natural Resources staff work in the spring to control lesser celandine so that native plants like celandine poppy, Dutchman’s breeches and trout lily do not get crowded out and instead thrive. Proper identification when controlling invasive species like lesser celandine is extremely important. The native marsh marigold (Caltha palustris), which is much less abundant, very closely resembles lesser celandine. Also, before the plants bloom the leaves of some of our native violets can be confused with that of the celandines.

Rich native biodiversity is the key to a healthy ecosystem. Great Parks is dedicated to the protection and preservation of natural resources and one way we accomplish this is through controlling invasive species.