What is Lawn Bowling?

If you’ve ever been out to Little Miami Golf Center, you might have seen a fenced off area of turf that’s separate from the driving range and golf course. The turf looks familiar – like a putting green – but the shape isn’t right. So what is the purpose of this place? Believe it or not, it’s for lawn bowling! 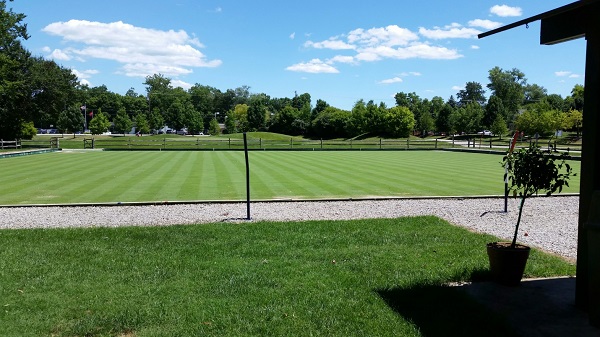 What is lawn bowling?
Lawn bowling is a game played between two individuals or two teams. The object of the game is to roll grapefruit-sized “bowls” (ball-like objects) weighing about 3.5 pounds each toward a small white ball called a “jack” located at the other end of the green, about 100 feet away.

The fun part is that a bias is built into the bowl so that it arches 3–6 feet at the end of its roll. The person who has rolled their bowl closest to the jack scores a point. This means that the straightest roll won’t get you a win. A good lawn bowler has to account for the curve.

Similar to regular bowling, games can last about 1.5 hours. But since the bowls are much lighter than bowling balls, the game requires minimal physical effort and can be enjoyed by all ages. There’s still a lot of skill and some moving around, though, so lawn bowling is actually a physical education class at some local high schools! 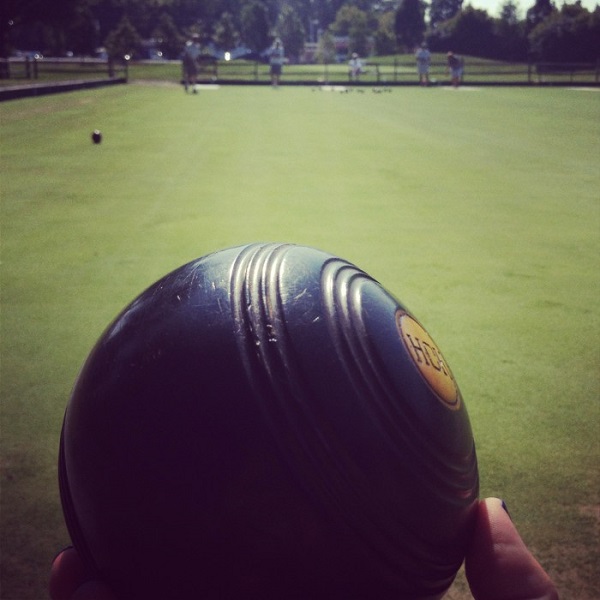 A lawn bowling ball, or “bowl”  (Photo by adventuremomblog.com)

How did lawn bowling get started?
Lawn bowling has been recorded back to 1299 in England by The Southhampton Old Bowling Green Club, which is still active today. It is believed to go back as far as 5,000 years ago! But back then, it was a game of kings, queens, presidents and the rich. The really rich, like J.D. Rockefeller, George Vanderbilt and George Washington, even had their own greens installed on their properties. Lawn bowling became so popular that at one point it was prohibited by law in France by Charles IV and England by King Edward III, because archery was being neglected, which was essential to their national defense.

The first greens in America date back to 1615 in Boston. In Cincinnati, lawn bowling dates back to 1922, where it was played on the inner green of the now-extinct horse racing track in Oakley. The group moved to a green by Xavier University in 1938, where it was played for another 50-plus years until the green was destroyed during the expansion of Victory Parkway. In 1997, Great Parks constructed a 16,000-square-foot green at Little Miami Golf Center in Newtown. This is the only green within 250 miles of Cincinnati. Cleveland is the closest green, with Chicago being next.

What is the lawn bowling green?
The green is predominantly creeping bentgrass with very little annual bluegrass. It is maintained similar to a golf course green, but it is just not mowed as much. It is mowed three to five times per week, depending on days of play. It is fertilized, treated with pesticides, aerated, verticut, top-dressed and loved like all the other greens at Little Miami Golf Center. 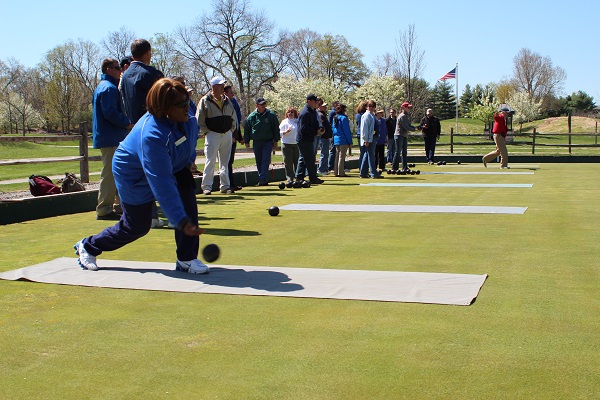 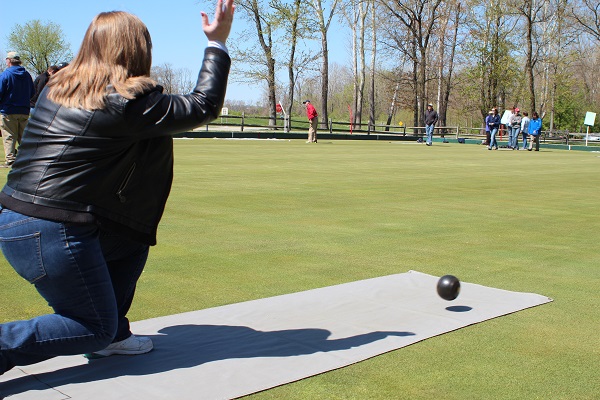 How can you try lawn bowling for yourself?
The lawn bowling green at Little Miami Golf Center is scheduled by The Cincinnati Lawn Bowling Club. They have leagues that are played at least three days a week at 6:30 p.m. on Tuesday, Thursday, Saturday (and some Sundays), May through October.

The group is always open to new members, and they are very passionate about their sport and are always willing to pass along their knowledge. They will teach everyone from individuals to small groups on almost any day. There is a small fee for an annual membership, but the first two visits are free and include a lesson and equipment. So stop out at Little Miami Golf Center, and try it for yourself!