It was only two weeks ago that the region was buried in snow and now the rivers are flowing, creatures are stirring and plants are starting to flower. One of our favorite signs of spring in the parks is the emergence of eastern skunk cabbage (Symplocarpus foetidus). 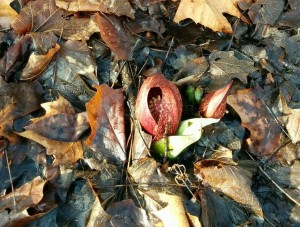 Skunk cabbage is amazing because its flower produces heat! There are other plants that are also capable of thermogenesis during short periods, but skunk cabbage can actually keep its temperature at about 20°C (68°F) for a week even when air temperature is below freezing. The female spadix (a spike of many small petal-less flowers) senses air temperatures. If there is a change of 1°C or more, then the amount of heat produced is adjusted as often as hour. The heat is generated by a process called thermogenesis where mitochondria of the cell use sugars to produce heat instead of the type of energy plants typically produce during cellular respiration (ATP). All this heat allows skunk cabbage to melt through snow and bloom in early spring. 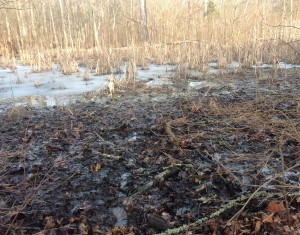 The name comes from the foul odor it emits when blooming or when a leaf is damaged. This smell, along with the heat, helps attract insect pollinators. After it is done flowering the leaves will emerge and grow much larger. While it resembles a cabbage, it’s really in a different plant family, which is Aracea. Other plants in this same family are the common house plant called peace lily and the wildflower Jack-in-the-pulpit. Unlike these familiar relatives, skunk cabbage is only found in wetlands.