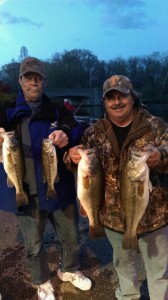 The next Sharon Woods Bass League tournament will be on Wednesday, April 29 at 6 p.m.

MWF Panfish Tournament
We had 12 teams enter in the Panfish Tournament on April 12 at Miami Whitewater Forest Lake. The winning team, Frank Yates and Bill Smith from Cincinnati, caught over 30 pounds of crappie and bluegill on small jigs. Curtis Meece and Chris Hagerden finished in second place with 24.77 pounds. Brian and Breanna Short finished in third with 24.01 pounds.

The fourth tournament of the Panfish Cup series will be held at Miami Whitewater Forest on April 25. There is no limit to the number of bluegill and crappie that you can weigh-in at this fun event. Prizes will be awarded to the top three teams at the tournament. The team that weighs-in the most fish through all five events will win the cherished “Panfish Cup.” Entry fees are $40 per team, per tournament, which includes the boat rental. Sign-up the morning of the tournament beginning at 7 a.m.