April Means Fishing for Everyone at Lake Isabella 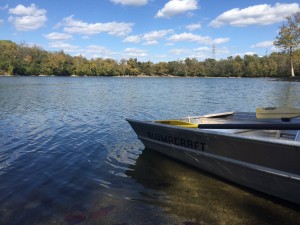 April is quickly turning into one of the best months to go fishing at Lake Isabella. So far this month, we have had a nice mixture of warm and cool days. These temperatures have been ideal for catching rainbow trout. During the month of March, we stocked well over 2,000 pounds of rainbow trout. These trout averaged between one and one and a half pounds. Fishermen at Lake Isabella have the most luck when water temperatures are between 50 and 58 degrees. The last time we checked the water temperature, it was sitting at 52 degrees. 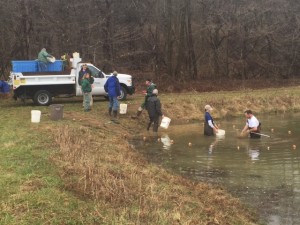 You are allowed two poles (three with an “EXTRA POLE” stamp) per ticket, so why not drop a line to try and catch one of our hybrid bluegill? Last Friday, with the help of our Stewardship Department and some awesome Great Parks volunteers, we received our annual stocking of hybrid bluegill. These fish, a cross between a bluegill and a green sunfish, were raised in aquaculture ponds for three years before they made it to Lake Isabella. Hybrid bluegills are perfect for everyone-they’re fun to catch, they’re big (many bigger than my hand), and they are used to being fed every day!

For the last two weeks in April we are going to be stocking yellow perch. This doesn’t mean you have to wait to catch these tasty fish. The fishermen are just now catching the perch that were stocked last fall. A few of the popular baits lately have been red worms, Rooster Tails tipped with a wax worm, or Mimic Minnows and Slug Bugs (both of which are on sale this month). 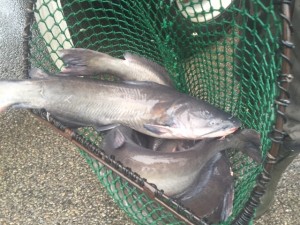 During the first week of April, we stocked hybrid bluegill; the last two weeks of April are going to be yellow perch; so what about this week? BIG BLUE CATFISH! These big fish arrived a few days early and ranged anywhere from 15 to 48 pounds per fish. These will be prize winning catfish during our Rod Busting and Reel Screaming Tournaments (5/30, 6/27, 7/25, 9/20) and our new weekly Colossal Fish Contest starting in May. Check back in a week or two for more information regarding this “colossal” event happening at Lake Isabella.

So whether you are trying to catch some of the remaining rainbow trout, bringing the family out for some bluegill and perch fishing, or testing your gear against some of the biggest catfish in the area, Lake Isabella has something for everyone!