We held the first Panfish Cup tournament of the year at Miami Whitewater Forest on Saturday, March 21, 2015. The lakes ice recently melted so the water temperature was a cold 40 degrees. With water temperatures that low, it can make the fishing slow for crappie and bluegill. The majority of the fish that were caught on Saturday were bluegill. We had nine teams enter the tournament for their chance at the prized Panfish Cup. 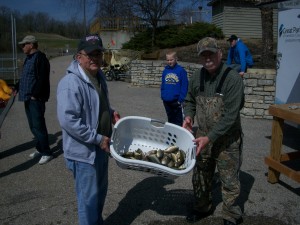 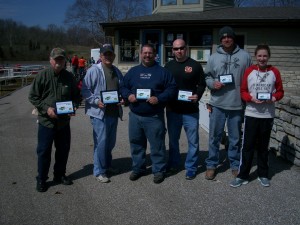 Frank Yates and Bill Smith teamed up for the win catching almost 13 pounds of fish. They used small jigs around the banks, fishing near structure in the water. Jonathan Keller and Tom Doersam finished in second with 7.17 pounds and Brian and Brianna Short finished in third with 3.07 pounds.

The next Panfish Cup tournament will be at Miami Whitewater Forest Lake on Saturday March 28, 2015. Entry fees are $40 per team, which includes the boat rental. Sign up the morning of the tournament beginning at 7 a.m. There is no limit to the number of crappie and bluegill that teams can weigh-in.

Friday, March 27, 2015, will be the last spring stocking of rainbow trout at Lake Isabella. Another 500 pounds will be stocked to give a spring total of 2,250 pounds! Anglers are having good luck with catching the feisty trout on minnows and Powerbait.