Catfish are an amazing group. Ranging from the tiny candiru of the Amazon, to the 9-foot, 650-pound Mekong giants, they are one of the most diverse and far reaching orders of fish in the world. At upwards of 3,000 species – and possibly even more – their diversity is simply astounding! So imagine my surprise when I heard about a catfish that only lived in one section of one river in Ohio and nowhere else in the entire world! Now this is a very rare and exiting thing to hear indeed. Ohio has practically no endemic species. (An endemic species can only be found in a certain region, for example, the lemurs of Madagascar are endemic to that region.) But somehow this little catfish is Ohio’s very own endemic species.

Now when I say a little catfish, I do mean little. At just a couple of inches long, the Scioto madtom would be hard to find even if it were common. It gets its name from the Scioto River, where it was first discovered. The second portion of his name comes from a myth that a gentleman by the name of Tom was once impaled by the fish’s spines, and the venom drove him mad. Unfortunately the myth that I just made up is completely untrue. The proper story behind the name is that tom is another word for cat, and madtoms tend to be very wiry and can stick you with their troublesome little spines. 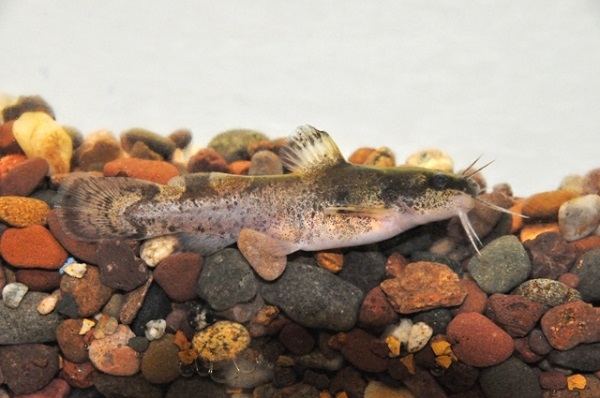 A brindled madtom, found in the eastern U.S, including Ohio. Unfortunately there were never any pictures of the Scioto madtom taken.

As you may know, the 1960s weren’t exactly the prime period of water quality in the U.S. Many rivers and lakes were horrifically mistreated, and Cleveland is now famous for having its rivers catch on fire. This sad portion of America’s history may have been the reason why the Scioto madtom hasn’t been spotted since 1957. With advances in technology, the previously known range of many species has increased, and fish that we thought were rare in the 50s are now known to be quite common. However, Ohio’s little madtom has yet to be found and may, in fact, be extinct. Unknown to most of us, the Scioto madtom could have been our state fish, but we managed to drive an animal that was only found in our state to extinction. That’s a bit sad don’t you think?

A cool thing is that while the Scioto madtom is thought to be extinct, there is always a chance there could be a breeding population that we just haven’t found yet. Imagine rediscovering a species only found in your state. Wouldn’t that be a nice thing to be known for? So just remember when you are out in the Scioto River basin, keep a look out for a wiry little catfish named Tom.