Why is the Water Orange?

Imagine you are enjoying a nice walk on one of the many Great Parks trails and in a nearby stream you see this: 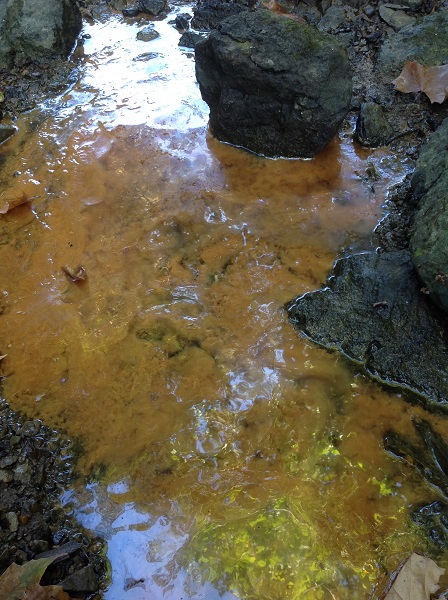 What is it?
A)  Some strange chemical
B)  An incredibly large orange juice spill
C)  Water stained from autumn leaves
D)  Iron bacteria

If you chose option “B,” you might be thirsty. But if you chose “D,” you are right! “Iron bacteria” is a term used to describe bacteria that can use water-soluble forms of iron in water to help produce oxygen. You’ll often find this type of bacteria any place – such as a well-water system – where water and iron, or soils with iron, come in contact with one another.

Iron bacteria are small, single-cell living organisms that are a natural part of soil and groundwater habitats. They commonly produce an insoluble precipitate of iron, which is a solid that comes from the liquid water. This iron precipitate is orange to brownish in coloration, gelatinous and sticky.

Sometimes iron bacteria also produce an oily sheen that can be seen on the surface of the water. Often the sheen is confused with petroleum products and cause concern. One way to tell if the rainbow-colored sheen you see on the surface of water is petroleum-based or bacteria-based is to do a disturbance test. Using a stick or a rock, you can disturb the surface and see what happens. If the water makes ripples and the sheen seems to move with the ripples and remains intact, it is likely caused by a petroleum-based product. If the sheen breaks apart and becomes fragmented or cracks instead of remaining spread across the water, it is likely some type of bacteria. 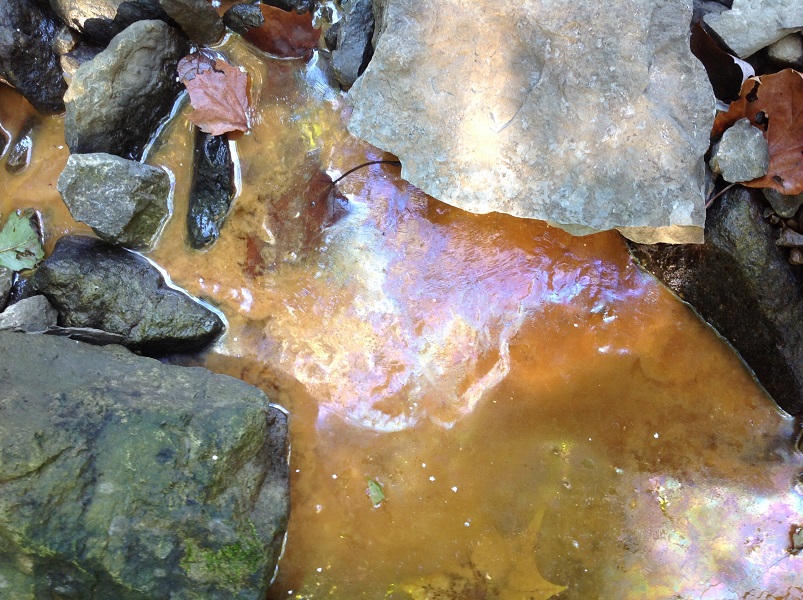 Iron bacteria typically don’t cause any health issue for humans. These bacteria can discolor water and give it an unpleasant taste or odor and stain clothes. But while your first impression on seeing it may be of concern or disgust, iron bacteria are just another part of our natural world and of our Great Parks!