More often heard than seen, coyotes have established quite a population in Ohio. Interestingly enough, these intelligent, adaptable animals were not found in our state originally. However, since the 1960s, coyotes have become more and more “urbanized.” They’ve even been known to live – and thrive – in downtown Chicago! 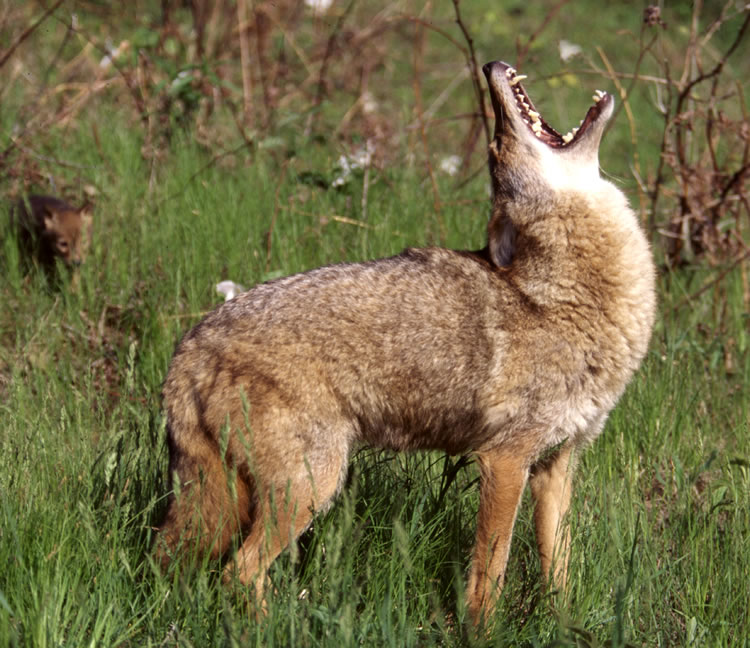 Coyotes have found a way to adjust and adapt to most any habitat. Their preference may be grasslands with adjacent woodlots, but if ample food and shelter can be acquired, any place will do for them, including suburbia. This shows true character and utter grit, as they are among one of the only species that has succeeded in inhabiting most every place in North America. The name “coyote” actually means “trickster,” more than likely in recognition and respect of their instincts and hardiness.

Within their territories, individual coyotes do not normally form tight packs like wolves. The males require a larger space than females, marking it with urine to ward off any unwanted coyote visitors. When pups are born, the bond of the pack grows so that the responsibilities of raising the young can be shared. It is thought that coyotes mate for life, but not much is known about how they go about bonding as a couple.

One thing is certain. Coyotes are social. They do check in on one another. And this isn’t done in a quiet way. Coyote yelps, barks and howls can be heard from quite a distance. Although some may say hearing the howl of this animal raises the hair on their neck, the calling serves a purpose. It allows members of the loosely based pack to “talk” over long distances, know the locations of other members, hear about discovered hunting grounds and clarify territories.

The diet of an urbanized coyote is pretty varied. Their favorite meals include rabbits and voles, as well as berries and acorns. These animals have no rhyme or reason to the time of day…or night…they are active and hunting. It depends on each individual’s preference and probably on human activity around them. Again, it is all about adaptability and smarts.

Sometimes, human and coyote interactions are inevitable, but normally we will just hear the night choruses from afar. If we can pause, listen and consider what these animals are saying to one another, this curiosity can open our minds to a new perspective. Indeed, as we listen, we are receiving their message as well. In that moment, we have a distinct connection with those coyotes and, ultimately, with nature.

The potential to hear coyotes communicate can be realized at Great Parks of Hamilton County. Join a nighttime program or even choose to sleep under the stars at one of the campgrounds. Find opportunities online or in the seasonal GO Guide, which can be picked up at any of the parks.