Ladybugs to the Rescue!

Aphids, which are sometimes referred to as “plant lice,” are among the most destructive plant pests. Their slender mouthparts can be used to penetrate leaves and stems and suck out or drink the fluids from the plants they attack. The results to the plant can range from yellowing leaves, curled leaves, twisted stems, stunted growth, sooty mold fungus and even death.

Natural predators are a very effective form of biological control for unwanted plant pests like aphids. These natural predators are also beneficial insects, and the champion when it comes to aphid control is the ladybug! Both the ladybug larvae and adult are predatory and feed mainly on aphids, but they will also feed on other scale insects and mites. A ladybug can eat as many as 50 aphids a day and up to 5,000 in its lifetime. She has also been known to lay her eggs in a colony of aphids, so that when the eggs hatch they won’t have far to go in search of food. 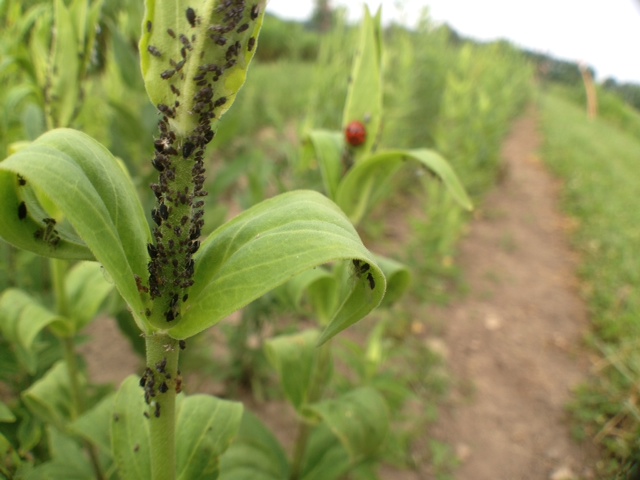 The picture shows colonies of aphids forming in royal catchfly (Silene regal) – note the already curled leaves! In the background, a lone ladybug is going to work. After this photo was taken, more ladybugs appeared and the colony was destroyed. What a great ally for the nursery!