Call of the Wild

I once read that birds with a very simple call (think of a blue jay’s squawk) had it prewired in their brain, and birds with a more complicated call (like the melodic call of a wood thrush) had to learn it. Last summer, over the course of a week, I was fortunate enough to see that principle in action. Adding to this excitement was that I got to experience it right along with our guests!

Last year, we created a new game where participants matched up a recording of an owl call with the species’ picture. During this game, the screech owl occasionally looked in that direction and uttered a sound of minor annoyance. The great horned owl was completely unimpressed and unfazed. The barred owl did take notice of his species’ call – which kinds of sounds like the owl is asking “who cooks for you…who cooks for you allllll” – and by the end of the first day he gracefully lifted his head and softly added his own timid “all.” A couple of people noticed and commented, but I couldn’t believe it, since we had never heard him vocalize before. And how did he know which of those calls was his? 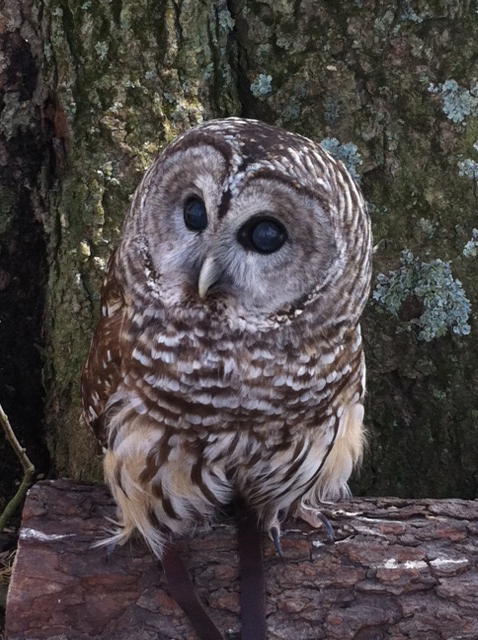 He came to us very young, after a collision with a car left him mostly blind. Although owls see quite well and hunting is accomplished primarily by sound, his disability would make it extremely difficult for him to navigate his heavily forested habitat. Since he never got a chance to learn it in his element, was it possible we were witnessing the process of the barred owl acquiring his call?

Over the course of the week, he did indeed master that complicated call. During the last days of “Owl Week,” he filled the barn with his bold sound to the delight of our park guests. This year, we heard him vocalize many times, but watching everyone’s look of surprise and wonder made it new and exciting every time.