One of the things that make fishing so interesting is all of the factors that play into success. Everything matters: bait selection and presentation; boat position and structure; time of year and weather; and even the moon phase can influence fish activity. Sometimes, maybe only once per year, the stars align and fishermen experience one of those special days.

That is exactly what happened at Miami Whitewater Forest on Saturday, July 12. There were 21 teams of anglers who competed in the Bass Series tournament, sponsored by Bass Pro Shops. By the end of the weigh-in ceremonies, 18 of those teams had weighed in fish. Brian Short and Mike Hoefker set the bar early with a five-fish limit that weighed 6.09 pounds. Greg Stephany and Jamie Rains eclipsed that mark with an 8.07-pound limit that included a beautiful 4.11-pound big bass. In many tournaments that would earn them awards for first place and big bass…but it would only be good enough for fifth place on this special day.

James Whitaker and Brian Mclucas brought an 8.25-pound limit. Greg and Rick Alsept took the lead with an 8.87-pound limit. The father and son team of Gary and Tyler Manning weighed in five awesome bass totaling 11.77 pounds that included a 3.73-pound fish. With only two teams remaining, it looked like the Mannings would claim their first victory of the year. Then, Julio Delgado and Paul Regensburger pulled a 4.98-pound lunker from their livewell to overtake big bass honors, and added three more beautiful bass for a grand total of 11.86 pounds. They eclipsed the Mannings by mere ounces to win the tournament and claim $1,330 in Great Parks prize certificates and some very nice plaques. 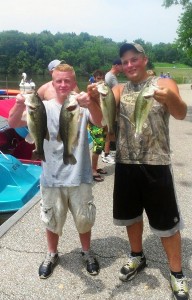 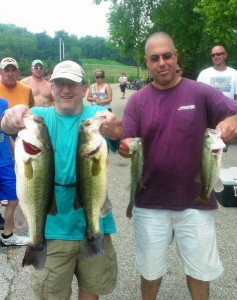 After the pictures were taken, there was one team left standing at the scales with their livewell. Anticipation of another huge limit was squashed when they announced that they only had two keepers. However, the best was indeed saved for last when Lewis Fillers pulled out a 6.60-pound bass to win the big bass award. He caught the fish at 8 a.m. on a black and blue jig pitched to the side of a laydown tree…wow! 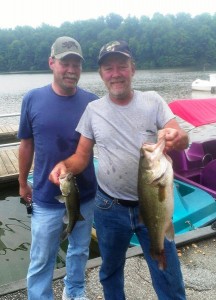 In the end, 68 keeper bass were weighed in, totaling 101.35 pounds. Most of the fish were caught on plastic worms, creature baits and jigs. Catches were reported from one end of the lake to the other, but wood structure seemed to be the key factor.

The next opportunity to test your bass angling skills will be at Winton Woods on July 27. I expect many limits to be caught. If you enjoy throwing crankbaits, then don’t miss that tournament, since it will be the dominant pattern in play.

If you enjoy catching fish other than just bass, there are a couple of upcoming events for you to consider. There will be a Midnight Madness tournament at Lake Isabella on July 19. Teams will fish for a six-fish limit of any species. The event begins at 10 p.m. on Saturday evening and concludes at 6 a.m. on Sunday morning. There is a perfect opportunity to take a kid fishing at Sharon Woods lake on July 26 at the Adult/Child fishing tournament. The entry fee is only $20 for this no-limit event. The tournament begins at 9 a.m. and ends at noon.