Lake Isabella will be hosting not one, not two but THREE Midnight Madness Tournaments this year on Saturdays May 17, June 21, and July 19. There have been a lot of questions about Great Parks’ newest fishing tournament here at Lake Isabella. So I’d like to take a minute or two to go over the rules for the Midnight Madness tournaments.

First and foremost, Great Parks are extremely excited about this new tournament, and the goal is for everyone who participates to have a lot of fun! But since Lake Isabella is a pay lake and a little different than our other core lakes (Winton Woods, Miami Whitewater Forest, Sharon Woods), the Midnight Madness tournament will be ran slightly different.

Cost
The entry fee is $40 per team of two anglers. Like any Great Parks’ tournaments, only two poles per angler will be allowed, and extra pole stamps cannot be purchased. Your entry fee does not include boat rental fee. Boats will be provided on a first-come-first-served basis for an additional $11.50 per team.

Schedule
All of Midnight Madness tournament events will start promptly at 10 p.m. and go until 6 a.m. the following morning. Registration will start at 8 p.m., where you will be given a float with a number on it. That will be your team number, as well as how we will determine if you arrive on time for the final weigh-in. (Do not lose your float!)

The 10-minute pre-tournament meeting will start at 9:30 p.m. (this is earlier than it would be at our other lakes). After the Tournament Coordinator is done going over all of the rules, you will then be allowed to go to your fishing spots (on a boat or on the bank). This will allow your team around 20 minutes to get to your spot before the tournament begins, so there will be no need to rush. With that being said, casting a line prior to the start time (10 p.m.) will result in being disqualified. At 10 p.m., an air horn will go off at the dock to signal the beginning of the tournament and you can then begin casting.

During the tournament, you can fish from the bank and/or a boat. If you chose to fish from a boat, you are required by Great Parks Rangers to have a source of light on the boat at all times. Teams fishing from the bank are not required to stay together, but it is highly encouraged that you stay in contact with one another so that you don’t exceed your tournament limit (six fish at any one time).

You have until 6 a.m. to catch your trophy fish. You will be required to turn in your float with team number on it no later than 6 a.m. Any team that turns in their float after 6:01 a.m. will not have their catch weighed.

Weigh In
These tournaments are a six fish limit tournament. No team is allowed to have more than six fish at a time, and exceeding your limit will result in disqualification from the tournament. Culling will be permitted, and each fish can be officially weighed throughout the entire course of the tournament. What this means is that if you catch your limit by 1 a.m., we encourage you to go ahead and weigh them in. We will record them individually, and then you can get back to fishing. Bring another limit in at 6 a.m., and we will cull for you. Only your largest six fish will count.

All fish caught during the tournament will be immediately released after they have been weighed. Fish baskets, bait pens and nets are highly encouraged to keep your fish in until they are weighed. Stringers will be permitted, but we ask that you don’t string fish through the gills and that you bring your fish in to be weighed as soon as possible 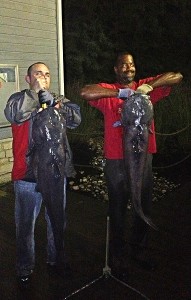 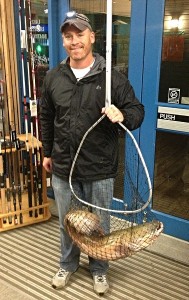 Prizes & Bragging Rights
After all of the teams have weighed in the results are tallied and first, second and third place teams will walk away with Midnight Madness trophies and Great Parks prize certificates. But that’s not all! The person with the biggest fish of the night will walk away with a Bass Pro gift card!