There’s no Loveland Frog, but we do have some monster fish and a mysterious bird at Lake Isabella!

Beastly Bluegill
Did you know that Lake Isabella’s monster bluegill are actually a cross between two different species of fish? Our hybrid bluegill, which fight like a largemouth bass and taste like the most exquisite of seafood, is actually a cross between a bluegill and a green sunfish. The reason behind this mad science is simple. By combining the aggressive and voracious eating qualities of green sunfish with the fast growth and tasty meat qualities of a bluegill, you get a dazzling gold, green and blue hybrid! And to top it off, these hybrids are even raised by Great Parks of Hamilton County (talk about a self-sustaining park district!). 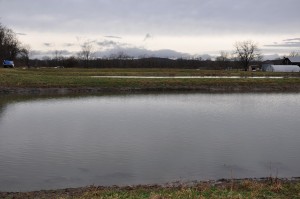 We started the month of April with a stocking of 500 pounds of hungry hybrid bluegills grown by staff at Shaker Trace Nursery in Miami Whitewater Forest. At first, the hybrids were nowhere to be seen. As soon as they took to the water, they went deep and hid; unwilling to take any bait. By Saturday afternoon, with the sun returning and the temperature rising, they began to appear at the end of our guests’ lines. Sunday morning rolled around and so did the hybrids. One of our regulars even caught his limit by noon! Around the dock and stretching to the rocky shores near the rowboat ramp seem to be the most productive areas for these beastly fish right now.

Just like most fish, there isn’t one perfect method to catching these aggressive eaters. The best technique that has landed me many of these fish in the past is simply using half a nightcrawler on a long shank hook, resting on the bottom. I slide the split shot weight up about 6–8 inches from the hook, let it sink to the bottom and wait. The second best technique is using a green or yellow mini mite from the boathouse and jigging it along the bottom. (Tipping the hook with a maggot or wax worm only entices them more!). Cast out near structure or rocks, let it sink and then lightly jerk it. Continue to do this “jerk and sink” action until the jig gets close enough to where you can re-cast it again.

Trouts & Cats
The trout continue to be the top catches in the lake, even when the temperature was up in the 60s this past weekend. Many of our trout fishermen still reach their limits daily. Remember to follow the wind if you want to find the trout!

On Friday, April 11 our beloved channel catfish stockings resumed with a massive stocking of 500 pounds. These will run weekly all the way until September. I can taste the fried catfish now!

Fishing Clinics
If you give a man a fish he will eat for a day, if you learn to fish at Lake Isabella you can catch fish for the both of you for a lifetime! Our weekly fishing clinics begin Tuesday, May 27 and run through the summer every Tuesday at 6:30 p.m. It’s a perfect opportunity to learn a new sport or polish some long-forgotten skills. And since we love fishing so much, these clinics will proceed rain or shine (so dress appropriately). 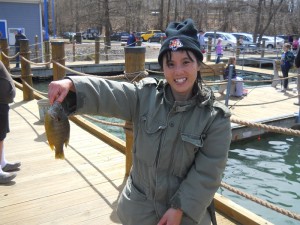 Bird Watching?
While Lake Isabella has plenty of cozy corners along its banks to fish, it is more than just a place to escape and fish for a few hours. We are often overlooked or not even considered for one of our greatest offerings here: bird watching. Just this winter we were graced with a white winged scoter that wintered here for a period of a few months. These birds are a rarity in Cincinnati and tend to stay north in the Great Lakes during their wintering. These beautiful diving birds are from the far north, hailing from places like Alaska and northern Canada!

It’s not uncommon to hear a belted kingfisher scream as it flies over the lake or the shrill call of a pileated woodpecker. Just yesterday, I happened upon a pair of wood ducks near the river. They quickly shot into the sky and up into the trees where they nest. Over the winter, we also had a large flock of hooded mergansers that kept to themselves in the overhanging trees in the southern area of the lake. Some of our resident birds include several great blue herons, a flock of turkey vultures and some quirky mallards. We also get some visitors who scavenge the lake frequently like ospreys and red-tailed hawks!

The star of our park is a mysterious and elusive bird many people don’t notice watching them over the top of her nest, as they picnic in the upper fields of our park. She nests in a huge metal drum that looks like the bottom half of a giant pop can. Regularly you can see the top of her head poking out, watching the fields below for any mice or rodents that might be unfortunate enough to scamper on by. The celebrity of whom I speak is a beautiful great horned owl (only the coolest animals in the animal kingdom get “great” in front of their name!). It is a real treat to see her poke her head out and watch the people below! 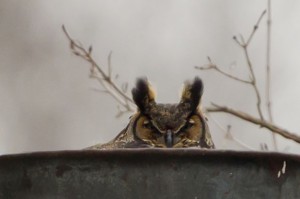 As always, if you have any questions, comments or concerns, drop us a line at 513-791-1663. You are also more than welcome to stop in and chat. We love visitors!