One afternoon I booted a partially frozen frog high into the air—it was more like two or three of them, actually. I didn’t mean to. I just happened to be shuffling along my backyard, enjoying the winter landscape when it happened. In the span of maybe three seconds, my foot made contact with something, and as I watched the mystery object sail spectacularly up and arc right, I thought, “Weird, that looked like a frog.”

I quickly walked over to pick a large bullfrog out of the snow (kicking up another one on my way). I thought that it might be dead, since it was not squishy at all like a frog should be. It didn’t feel frozen solid either. As I held it in my warm hands, it very slowly blinked one eye, then the other. I felt like it shouldn’t be wasting all this energy proving to me that it was still alive, so I re-buried him, as well as his friend, just under the leaf litter under the snow. As I was leaving that spot it happened again, so I decided that it just wasn’t a good place to walk. 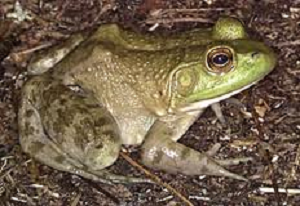 The bullfrogs were in their suspended state of animation, because they were partially frozen. As cold-blooded animals, their body temperature fluctuates with their surrounding temperature. Frogs aren’t as good at digging as toads are, so it’s harder for them to bury themselves below the frost line. Some frogs, though, have more freeze-tolerance than others. Wood frogs, gray treefrogs, spring peepers and some chorus frogs can wait out colder temperatures, because they have the ability to freeze nearly solid until spring thaw.

As frost forms on a frog’s permeable skin, it passes through the skin and begins to crystalize inside the frog. This quickly forms large areas of ice in the abdominal cavity and encases the organs. To prepare for this freeze, the frog’s liver produces large amounts of glucose, pumping the sugar through the bloodstream to load up the cells. This glucose, as well as urea (a waste product of the frog), functions as anti-freeze inside the cells to protect them from any permanent damage.

I love telling the flying frog story to kids when I’m teaching about animals in winter, because they find it absolutely sidesplitting. Grown-ups generally find it humorous as well, but I did learn a couple of things that afternoon. My walk led me to research the curious details regarding overwintering frogs. But I also realized you can read all about frogs spending the winter in lakes, ponds and streams, but until you take an enlightening winter walk outside, you may never find out that some of even the most aquatic species are content just to hunker down under some leaf litter and snow as they make their way slowly to their water source.