While some of the anglers were fishing for hundreds of panfish to accumulate for the most weight, others were hoping to catch a few monster catfish. The catfish approach ended up being the best route for Saturday’s tournament.

Seven blue catfish were caught during the tournament, six of which were over 20 pounds.  Butch Staat from Batesville, Indiana and Tony Thomas from Cincinnati, Ohio, caught four out of the seven blue catfish with a total weight of 82 pounds. The winners were using homemade strawberry chicken as their special bait. The second place team, Jon and Jessica Owens from Amelia, Ohio, were the defending winners from last year’s Turkey Day Open. This father-daughter combo caught three blue catfish weighing a total of 71 pounds. The Owens used cut shad as their special bait. Frank Yates and D. J. Huegel finished in third place with 11 pounds of panfish. 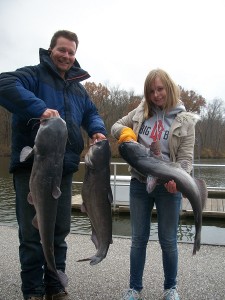 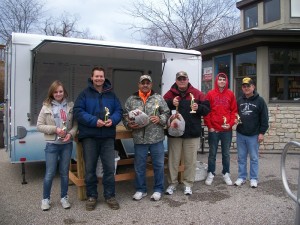 Congratulations to all winners! Thank you for another great fishing season!

Even though we have finished stocking for the year, that doesn’t mean the fishing season has come to an end. All of the Great Parks are open year round, and bank fishing is still permitted in designated fishing areas. There are still plenty of trout left to be caught at Lake Isabella and a winter fishing ticket will only cost you $4 per person.

Stop by Lake Isabella on Saturdays, November 23, November 30 and December 7 for the Annual Holiday Fishing & Tackle Sales. After you fit in a little fishing for yourself, pick up something special for the fellow angler on your holiday shopping list. Get great deals on rod-and-reel combos, buy-one-get-one-free specials on fishing line and 50% off on select apparel, floats, fishing baskets, Damiki products, tackle boxes and American Spirit reels. We even have gift certificates for those anglers who are more particular about what they want.