There is always something going on out at Lake Isabella, and last week was no different. We had 30 kids – both familiar faces and new – participate in our annual Hooked on Fishing Summer Day Camp. Not only did the kids get an absolutely beautiful week to go fishing, but they had a variety of activities to take part in as well.

Monday was spent going over the basics: everybody received their own pole, tackle box, split-shot sinkers, float and hooks, and our instructors went over the proper way to rig their combos. On Tuesday, one of our instructors brought in part of his antique lure collection to share with the campers, followed by an afternoon of making their very own lures.

Halfway through the week, how do you regain the attention and interest of 30 eight- to sixteen-year-olds? Easy! You bring in the Great Parks’ very own professional bass fisherman, Neal Ramsey! Neal came out Wednesday morning with his bass boat, getting the kids really excited again. Neal talked to them about his boat, different baits to use, proper casting techniques and fish identification. To top it all off, he even had a few fish in his live well to show off, and he let the campers get up close and hold some of them. The fish included bluegills, crappie and bass, and he even a sauger he had caught. 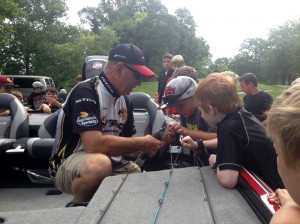 Thursday kicked off with some open fishing followed by an afternoon walk in the park. The campers played some Frisbee with each other and got to spend some time down by the Little Miami River exploring. On the final day of camp, Park Ranger Missie Shannon came out to Lake Isabella and talked to the kids about safety and what her responsibilities are as a Park Ranger. Then, after lunch, we tested how much they learned over a week’s time by having our own little mini-tournament. This ended with Andrew Lutomski catching a 1.33-pound bass on a hand reel off the dock with a wax worm! 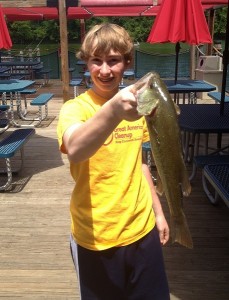 I would like to personally thank all of the campers, parents, volunteers, staff and special guests who made the 2013 Hooked on Fishing Summer Day Camp a success! 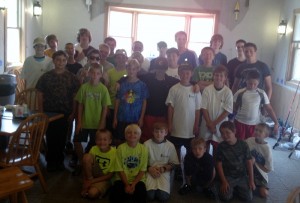