The Lion in the Forest

Here we have the lion’s mane fungus (Hericium erinaceus). Often found growing on hardwood logs, such as downed beech or oak trees, it is one of the easier wild mushrooms to identify. This one was found at Miami Whitewater Forest. Its very fuzzy appearance (this one isn’t quite mature yet, and some of them can get downright wooly) has led to its many common nicknames: bearded tooth mushroom, hedgehog mushroom, satyr’s beard, bearded hedgehog mushroom and pom-pom mushroom. 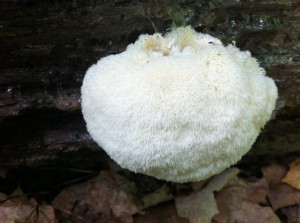 Just like all mushrooms, it produces spores. But unlike the scarlet cup fungus the lion’s mane fungus disperses its spores completely differently. Instead of asci, it has structures called basidia. If asci release spores like a party-popper, basidia function more like a catapult. In fact, the spore release of basidia is the fastest biological movement known in nature. In a fraction of a millisecond the spore accelerates with a force of over 10,000x the force of gravity! For comparison, a fighter pilot in a sharp turn may experience 16x the force of gravity. All that force is just to get the billions of spores far enough away from the mushroom that it might get picked up by an air current and find a nice happy place to call home.