We’ve talked about fungi and their complicated lives before, but here’s another one of our cool forest inhabitants: the scarlet cup fungus (Sarcoscypha coccinea). 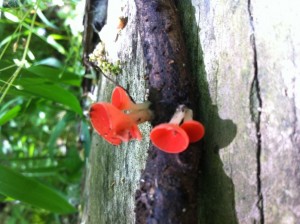 The scarlet fungus lacks the “gills” that we are used to seeing on the underside of most mushrooms (think of how a portabella mushroom cap looks when you flip it over). Instead, the top of the mushroom is shaped like a satellite dish and looks smooth to the naked eye. But if you look at its surface under a microscope, you’ll see hundreds of thousands of tiny structures called asci.

Asci are how the scarlet cup fungus releases its spores. They function like a squirt gun or party-popper, but instead of confetti or water they shoot out spores. The release is triggered by the slightest touch, such as a light breeze. When they’re triggered each ascus – and there are hundreds of thousands of them – releases their spores. These spores are carried away by air currents, hopefully to begin the life cycle over again. If you’re a fungus, the only way you will survive is that one-in-a-million chance of landing on a nice, moist place with plenty of food available, so it helps to release billions of spores to increase the odds.

To see the spore release for yourself, blow very carefully onto the surface of the scarlet cup fungus. In the right light, you can see the tiny cloud of spores erupt from its surface! They are pretty common (these were found in Winton Woods) so keep an eye out for them when you visit your Great Parks!