170 Pounds of Catfish
On Saturday, June 1, Ed Thompson and Eric Callihan caught six fish weighing over 170 pounds! They were the only rowboat that took advantage of fishing until midnight. Their biggest fish was a 45-pound blue catfish. The rest of the blue catfish and shovelhead catfish varied in weight between 15 and 35. They caught the catfish on bluegill using surf rods. Nice catch Ed and Eric! 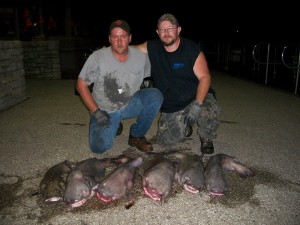 New Moon Showdown
Test your gear and skills against some of the biggest catfish in Ohio at Miami Whitewater Forest Lake at the New Moon Showdown tournament on June 8 from 7 a.m. to 3 p.m. Weigh-in your largest six fish to win. The entry fee is $60 per team and includes boat rental. Registration starts one hour before the start of the tournament.